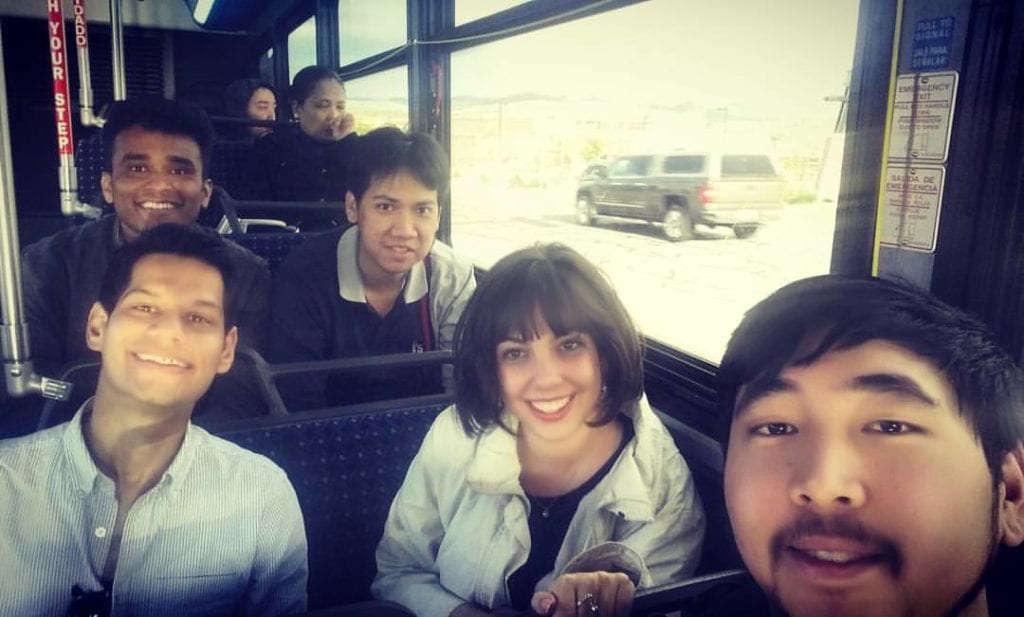 He does not want money or fame, nor does he feel the need to live a particularly long life. His goal is to have a harmonious life; to be going to bed pleased with what he has achieved. The value of life is measured by sense and not by length

After a 13-hour flight, on 19th May I finally arrived to Park City; a town in the state of Utah. Even though this is my third arrival to the USA, the excitement and fear of the new have overwhelmed me yet again. Upon arriving to the airport I took a 40-minute taxi ride to my employer’s place, and afterwards a colleague took me to my accommodation which is 15 minutes away. Employee housing is located in the town center and seasonal workers employed by the hospitality complex Stein Eriksen Lodge are accommodated in it.  The building is new and pretty, the apartments are comfortable, but the first impression is that it is rather empty and quiet, not at all like a student dorm which is how I had pictured it. I knew the season had not started yet and that most of the students were going to arrive, but it still seemed far too quiet for comfort.

The first three days were the hardest – I was suffering from  jet-lag, I ran into thousands of unfamiliar details relating to work and environment, with no internet, no phone and worst of all, no company. This all was framed by a cold, bleak rainy days. I desperately missed my familiar surroundings, a feeling of safety and support it offers. However, on the fourth day I noticed that I was no longer alone in the building, that there are a few young people around me. That is when things took a turn for the better. Much better. It became sunnier.

Aziz is 23 years old, and is one of the first people whom I have befriended. He comes from Brunei, a small country in South-east Asia, which has a population of only 420.000. He finished his primary and secondary education in Brunei and then, at the age of 18, he set off on his first big adventure – In Singapore he enrolled into a  culinary school where he studied for two years. Then he came to New York where he graduated culinary management. He heard of  Stein Eriksen at a job fair and he decided to do his professional training here.

This is where our roads met and I had a great pleasure to meet this dear person. Before delving into his story, it is important to stress that the restaurant where we are employed is rated five stars and that maximum level of organization, efficiency and dedication is expected of all the employees. Aziz works in the kitchen. He participates in preparing of every order which, like an orchestra performance, must be performed impeccably. While he is working, there is one composition going through his head: Bizet’s overture for the opera “Carmen”

The first part of the overture represents the moment when order arrives. The kitchen gets a new task and everyone goes to their instruments. The music inside his head stimulates synchronized work, helps to concentrate, it all must be in its place and dedicated. He considers the kitchen’s chef to be the orchestra conductor.  After the powerful rhythm of Bizet’s overture which resembles a march, as the food preparation nears its completion, the music slows down – the food is served on plates. The music stops at the moment when the waiter takes the plate and brings it to the guest. That is the moment when there is silence inside Aziz’s head. This lasts long enough only to take a single deep breath and then the music starts again – the new order arrives.

Food preparation can seem banal and prosaic, but the way Aziz describes it, it seems poetic. I was delighted with his comparison of the work kitchen staff does to how an orchestra functions and this story is definitely one of the triggers which made me want to share these life stories with the world.

More about Aziz. He finds great inspiration in the animated movie “The Wind Rises” by Japanese director Hayao Miyazaki which he recommends to everyone. The movie deals with Second World War, and what Aziz finds fascinating is the dedication and passion shown by the movie’s protagonist. The movie’s message is that no matter how difficult the circumstances might seem, he must find it in himself to carry on living the best way he can. This has become Aziz’s conviction and it helps him to overcome all the troubles and challenges he faces while he is doing his job, which he loves, and with it he is able to defeat defeats.

I asked Aziz what his plans and goals in life are. He said that he does not need money or fame, nor does he feel the need to live a particularly long life. His goal is to have a harmonious life; to be going to bed pleased with what he has achieved. The value of life is measured by sense and not by length.

Thank you, Aziz, for sharing a part of your life with us.

Linked articles: SUBOTICA’S OWN NINA ĆUJIĆ FOR THE MAGLOČISTAČ PORTAL FROM THE USA: EVERYONE’S GOT A STORY TO SHARE