LOVE IS A HUMAN RIGHT, NOT AN LGBT RIGHT 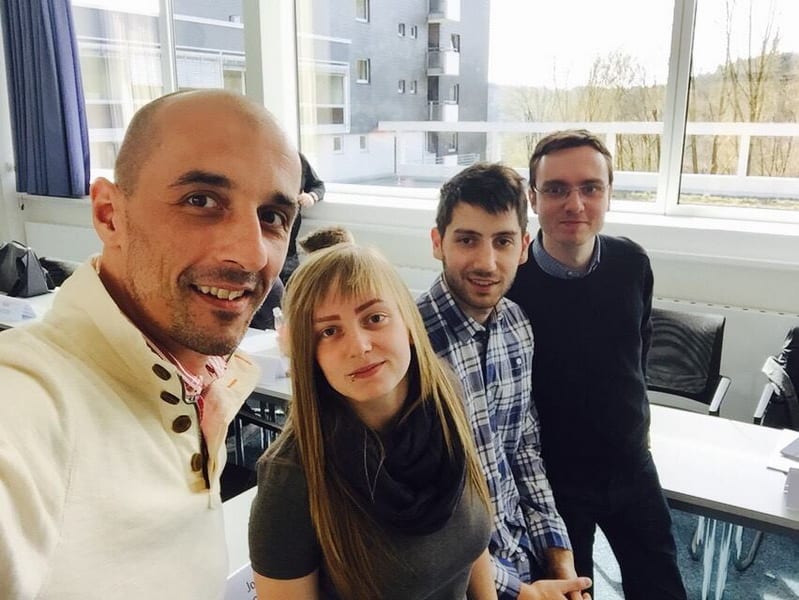 ….until it is within the limits of the moral frame

She said that while in high school, when asked by a teacher what marriage is, she answered that marriage is a communion between a man and a woman, a woman and another woman, and also a man and another man, recognized both at social and state levels. After such an answer, the teacher demanded from her to revise that one more time. Jelena persisted in repeating the same answer again and again…after which the teacher said that while she was working in the school, marriage is going to remain a socially and at state level recognized communion between a man and a woman.

The current level of recognition where LGBT rights stand, what the connection between liberalism and the LGBT rights is, what quality of life these people have, and the steps that the country is taking with regards to protecting their rights and increasing their viability within the society, were just some of the many questions which were discussed by the participants of the International LGBT human rights conference which was held last weekend in Germany.

(“Worldwide LGBT rights”) was held last weekend in the Theodor – Heuss academy in Gummersbach in Germany.
The gathering was organized by the liberal foundation “Friedrich Naumann” from Germany and the German Liberal Party; FDP.

The participants of the gathering were representatives of liberal political parties and liberal organizations, as well as LGBT activists who work on protecting gay and human rights from Germany, The Netherlands, Sweden, Italy, Russia, Belarus, Georgia, Montenegro, and Serbia.

The gathering was held with a goal of creating a common platform which will, through an exchange of experiences, identify the problems of this population from country to country and build mechanisms for their adequate solving and support.

The participants from Serbia were representative of the Liberal-Democratic Party’s human rights council (HRC) Jelena Dubovi from Subotica and Marko Zečević from Belgrade, whereas Montenegro was represented by an adviser to the president of the government, Jovan Kojičić.

Fight for a third parent

“Developed countries such as Sweden, Germany and The Netherlands, almost completely accept and respect the rights of the LGBT persons.” -states the representative of HRC, Jelena Dubovi.

However, she says that despite some countries respecting the gay rights, that does not mean that, if some other political option comes into power, they will keep the level of obtained LGBT rights. That is why a constant fight and development are necessary in order to raise people’s awareness with regards to the importance of the gay population’s rights.

This means that if two lesbians want a child and if, for example, they have a gay friend and he voluntarily donates sperm, it is taken into consideration, not to exclude the father afterward but how to regulate the law of that child having one more parent. So, that means that the child has mothers and a father who work on connecting families, spreading love, unity and life, without excluding people who want to be a part of the child’s life, one common family which is made up of more parents.

She adds that in developed countries gay activists are also fighting for acceptance of trans-sexuality and transgenderism. To us, trans-sexuality is still not a clearly enough defined term. Transsexual people identify themselves as members of the opposite sex.

Put simply, they are people trapped inside the body of the opposite sex.

A large number of transsexual people decide to undergo different medical procedures on their bodies. That includes a sex change after which hormones and plastic surgeries are often used.

“The whole process of these significant and demanding changes most often last a couple of years.” -says Jelena.

Uganda does not talk “about that”, Georgia and Russia are homophobic

David Kato, a gay activist, was killed in Uganda four years ago. He was ofter called “the father of the gay movement” in that country. Kato was killed immediately after winning the court case against a local daily newspaper who regularly published photographs of the local homosexuals and with that spread homophobia and initiated brutal violence directed at the LGBT community.

“Kato’s case reminds us of the power which the media has in creating violence directed towards minority groups, especially those consider by many to be against tradition of a certain culture.”, Dubovi reminds us.

The increase in violence which this population suffers is most present in Russia, as well as Georgia. Two years ago in Georgia, about 200 right-wing extremists, hooligans, physically attacked 20 gay activists who were hiding in one van which was pushed over, broke the vehicle’s windows in order to kill the people inside. The protest happened because the Members of Parliament were getting ready to adopt the law which prohibits homosexual propaganda.

“It is important to note that the Georgian Partrijarh represents great authority among the people who trust him unconditionally and he is fighting full force and with all methods at his disposal against LGBT people”- explains Jelena.

She says that, for example, in Germany religion is interpreted in a liberal and modern way and that there are certain churches which give their blessings to gay couples. “They can’t wed you but you come and have the ceremony and the priest blesses you.” -she adds.

According to her words, the more countries recognize same-sex marriage, the easier it will be for other countries to take the same route.

She reminds us that in Germany there is a change in law being passed regarding child adoption. Two lesbians can adopt a child but not together as a gay couple, as a family, which means the child will grow up with them, but on paper it will be one woman’s child, not of both together.

“Germany is also working on developing a political LGBT asylum. Most people have fled from Russia, because they can get protection.” she says, adding that women are anyway discriminated against by the society while lesbians face double discrimination.

Dubovi said that there were talks at the conference for the gay and human rights in Germany about how all companies should have a gay person employed. However, she considers it not important if the employer employs a LGBT person in their firm, but if that person meets all the business and professional requirements regardless of their sexual orientation.

What is the price of homophobia in Serbia?

As she says, last year in Serbia there was a relatively successful “Pride parade”, which leads to a conclusion that for its organization just the political will of the government was necessary, but also the fulfillment of the form towards the European Union.

There is still no sense of importance with regards to holding the “Pride” in Serbia, nor a sense of LGBT rights.

According to her words, the young are still eager to learn from obsolete, communist school books which are not in accordance to the educational practice of the 21st century.

“As long as the sociology school book says that marriage is a socially and by the state recognized communion between a man and a woman, we have a breach of the basic human rights in Serbia, as well as serious discrimination of the LGBT people.” warns Dubovi.

She says that in high school

She said that while in high school, when asked by a teacher what marriage is, she answered that marriage is a communion between a man and a woman, a woman and another woman, and a man and another man, the teacher demanded from her to revise that one more time. Jelena persisted in repeating the same answer again and again…after which the teacher said that while she was working in the school, marriage will be a socially and at state level recognized communion between a man and a woman

Gay as a personality trait

Dubovi says that the LGBT population in Serbia is invisible and the situation is all the more sad when going down south.

One side of the gay people is not visible due to their fear, the other side due to certain impossibilities such as the environment, family, work, fear…and the side which is visible only enhances the stereotypes and prejudice about how gay is not okay and that being gay is a disease.

Jelena says that, unfortunately, inside the gay population which itself advocates protection and improvements to the human rights, actually there is discrimination.

“Everywhere in the world there are gay places. But the female gay places are separated from the male places. So there are gay bars for women in which gay men are not welcome and vice versa, which presents a clear discrimination inside the LGBT population”, explains Dubovi.

She says that there is a need for much more work on raising awareness of the LGBT rights with this population’s presence in the public life, through media content, actions and other forms of viability and empowerment because only in that way the prejudice, stereotypes and conservative ways of thinking, present within the minds of a majority of Serbia’s population, can be taken down.

“The most efficient way of fighting for achieving the rights for the LGBT people is through education, in schools. The practice has shown that it is first and foremost necessary to educate the educators, not the children”, says Dubovi.

The Serbian version of the text can be read here.